This comes as no surprise to women, but men have needs too. The problem is, it comes as a big surprise to most men. Men are taught from a very young age that having needs is weak. Can you imagine a professional football player stopping play in the middle of a game because he needs to communicate a feeling. “Hey ref, I feel really inadequate and ashamed when you call holding on me. I was just trying to feel closer to the other team.” Or how about on the battlefield. “Captain, I feel really sad about all the guys I just killed. Also, I feel hurt when our enemies throw grenades and they land near me.”

Men are taught to be tough, to ignore and suppress their feelings and especially to ignore pain. Many forms of male bonding have to do with inflicting pain on each other and then having beers together afterwards. The only feeling that is appropriate for men to express on a regular basis is anger. That’s partially because anger typically shows strength and can be used to protect oneself and one’s family and scare others away.

Women, on the other hand, are taught to seek out and express feelings, especially hurt, sadness, and pain. Sharing feelings such as joy, hurt or sadness is a favorite pastime of most women and it is a favorite way that women often bond and seal their friendship.

Men generally experience this same interaction as torturous and painful, and they judge sharing these types of feelings as weak and wimpy. This is one of the reasons why men sometimes judge women as weak, fragile and irritatingly helpless. They are judging women from the same paradigm they’ve been taught to judge other men. It also goes a good distance towards explaining why women sometimes judge men as insensitive and unwilling to express their feelings. Men are taught to have a high threshold for pain and unless something flies above that threshold, men generally discount, avoid, or ignore it.

Instead of having needs, men are taught to have “wants”. Having wants or desires is okay. Desires create forward motion towards a goal which shows ambition, strength, and brings about industriousness. That’s the positive side. The negative side is that, by definition, a want is less essential to a person’s well-being. If you don’t get something you want, oh well. “Try harder next time” and “You can’t always get what you want.” are familiar sayings. But not getting a need met suggests that serious repercussions may follow – loss of health or well-being in some way.

So, men tend to ignore many of their needs and turn the rest into wants. Men have learned to come to terms with some of their needs, but they are usually very basic or socially acceptable needs. Men need space. Men need food. What are some of the needs that men have that often go unacknowledged and what are the consequences?

Men have the need to communicate their feelings. This means everything from sharing successes and failures from their day to communicating more basic emotions like hurt and fear. Because hurt and fear are generally such unacceptable emotions for men to express, they often don’t even know that they’re feeling hurt or scared. Most men have a subtle mechanism whereby hurt or fear is instantly transformed into anger without them even recognizing it. Women have a reciprocal mechanism whereby anger is sometimes translated into hurt or sadness since anger is often not an acceptable emotion for women.

Men are every bit as sensitive as women and they sometimes get hurt over small things. In a man’s world, this is not only weak, but it’s irrational, causing them to further distance, ignore, or misinterpret their own feelings. When feelings aren’t acknowledged or expressed congruently, they can end up leaving a person feeling distant, angry or resentful. 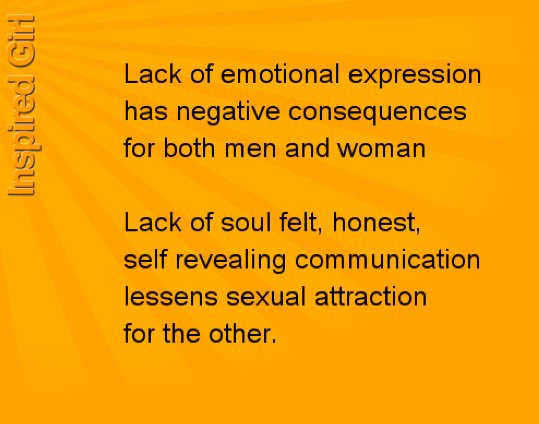 One of the most powerful aphrodisiacs is the excitement that comes from connecting with another person through honest, vulnerable, emotional expression and revealing inner thoughts and feelings. This is why most people find the beginning of relationships to be such a turn-on; both people naturally reveal themselves to the other person and they feel seen in the ways that they most want to be seen. During this time, when both people are risking telling secrets and revealing their passions and dreams, people experience an amazing sense of ‘turn on’ and sexual craving for the other!

When this emotional expression stops, so often does the flow of desire and sexual energy. Men are conditioned to believe that they are sex driven only and that the only thing that drives their sexual desire is the physical need for sex. However, when anger, hurt, fear or other emotions get denied, ignored and  suppressed, sexual attraction dies! Often men do not realize that not sharing on a deep level or being angry or hurt in relation to their partner has an impact on their sexual desire and attraction for the other; most men have no idea that there is a strong connection between the two!

One reason why men sometimes fear commitment is because sexual attraction to their partner over time is a vital need that most men have. In not recognizing that communicating feelings and having the freedom to be honest is a big part of what sustains sexual attraction, men wind up feeling powerless over their ability to sustain their sexual desire for the other and afraid that they will need to keep finding new partners to keep passion and sexual excitement alive.

Another need men have is the need to feel successful in relationship. One of the primary measures of a man’s feeling of success and satisfaction in a relationship is whether or not their partner is happy. Men will go to great lengths to make their partner happy because it makes them feel good about themselves and safe in the relationship. The problem is that women have been socialized to seek happiness through closeness, communication, and sharing feelings. Being able to be upset and have feelings, even the ones that are not pretty, is often what makes women happy.

Often women might start a conversation by sharing feelings with the assumption that the man will recognize this gesture as a desire to be close and so that she can be happy, but the man receives the communication of feelings as “my woman isn’t happy, something’s wrong!”

He then does his best to fix the “problem”. But in the woman’s world it wasn’t a problem, it was an opportunity for happiness. As a result, a man’s best attempts to make her happy leave her feeling unhappy and unheard and create more upset, which of course means less happiness in the man’s view. He then winds up feeling frustrated, helpless and inadequate.

In addition, men have physical needs including the need for food, rest, and sex. Men do need emotionally connected love-making, and they also need what Barbara and I refer to as “maintenance-sex”, sex where there is a freedom to indulge in more animal, base desires, and to simply release energy.

When it comes to food and sex, men are given a double-message. On the one hand, self-deprivation is considered a sign of strength because it shows that a man is not at the effect of hunger or sexual desire. On the other hand, eating a lot without becoming fat and seducing large numbers of women without ever getting attached is viewed (at least by other men) as a sign of a man’s power. The ability to function on little or no sleep is usually seen as a sign of stamina. The screwed up messages that men get with regard to their physical needs often makes it difficult for men to find a balance and learn behaviors which support mental, emotional and physical health. In addition, admitting that they NEED sex from their partner, rather than just wanting it, can often leave a man feeling powerless and overwhelmingly vulnerable to their mate and men often associate this feeling with being weak or wimpy rather than as a path to intimacy.

This is by no means a comprehensive list of men’s needs and it’s also not a statement of absolute truths about men. It’s a look at some of the messages that men receive as part of their socialization in Western culture.

Some men take on fewer of the messages society directs at them and some men have been more influenced by the female socializing pattern in their lives and may not identify with much that’s said here. But for men that have taken a good dose of society’s programming (and for partners of these men), there is a lot here to consider.

If that’s the case for you or your partner, here are some suggestions that you might find helpful in considering your needs: 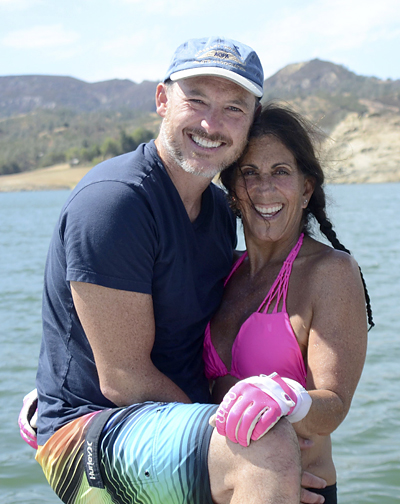 The author, Masen Yaffee, lives with his wife (inspired girl) and three cats in his male socialized paradigm. Sometimes he leaves it long enough to lead a workshop, or get along with his wife for a few days. 🙂