Huff Post Women recently posted a spreadsheet, that was supposed to have been written by a man and then given to his wife as she was going on a business trip, documenting all the times that he tried to initiate sex with her over the course of 6 weeks and her excuses not to. According to the spreadsheet, they had sex 3 times, in spite of his repeated attempts. Apparently, she posted it, implying that he was pointing out only moments that she didn’t want to have sex in the exact moment that he wanted it, and that his accounting of how often was inaccurate.

Some people sided with her, others with him; the responses are hilarious. They included everything from implying that she has sexual libido problems, to assumptions that she must be cheating on him, to others stating that they would divorce him for this, no questions, and stating that just because they are married, she doesn’t owe him sex. Those that sided with him implied that he will soon be cheating on her, and that she should expect it, and that if she doesn’t want ‘intimacy’ and always makes excuses, she has a problem.

Regardless of who is right and who is wrong, the sexual entitlement here is pretty undeniable. So is the immaturity.

“I’m not a marriage counselor,” writes Bob Powers of Someecards, “but I’m pretty sure that if you and the spouse aren’t sleeping together as much as you’d like, the way to turn her on is not with passive-aggressive use of Microsoft Office.”

I would have to agree that the sense of sexual entitlement and immaturity is likely not going to get anyone anywhere. Nor the passive-aggressive digs. However, it is clear that this man is hurt, angry, and feels rejected, and has no clue as to why his wife doesn’t seem to want to have sex with him as much as he might want.

It certainly is possible that this guy was considerate and thoughtful, that he was romantic and compassionate, and that he did everything he could to ensure that his wife was taken care of and that she remained turned on to him. But considering the spreadsheet, and the tracking of her behavior without any communication,  I sincerely doubt it. Seems to me that he was setting her up to fail, wanting to be right, and just trying to prove the point that the fault in their marriage was hers.

It got me wondering, what would the wife’s spreadsheet look like? What if she tracked all of his behaviors that decreased her interest in having sex and that were a ‘turn off’? Her list would likely include all the ways that she felt shut out by him, not considered, not heard, unsupported, unloved, and not romanced or turned on. 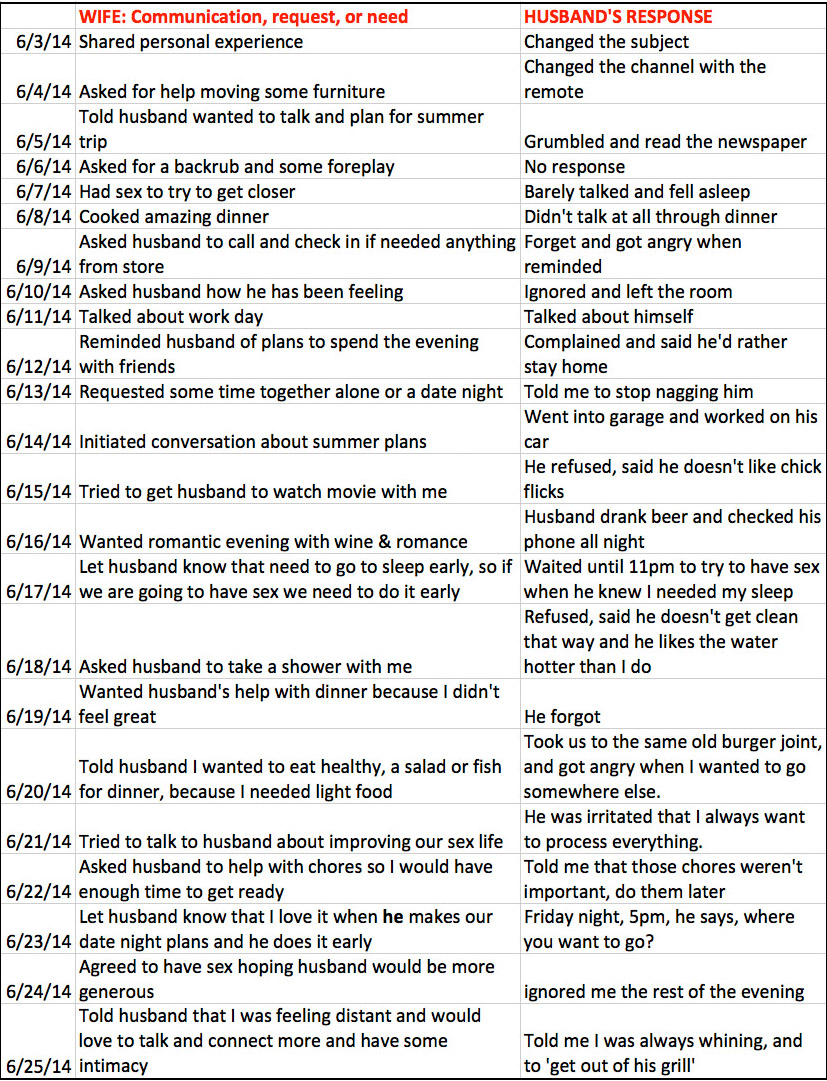 Perhaps when I was younger, less experienced at relationship, and much more driven by hormones, my own codependency, and a need for attention, I could have or would have had sex regardless of how I was treated or felt. However, with maturity, I have found that my sex drive and my interest in actually having sex is directly related to how I feel emotionally as well as physically, spiritually and in my relationship.

I think most men assume that their partners’ sex drive is similar to theirs. Men, (certainly not all men) tend to be turned on visually, quickly, and easily. For me, and for many of the women I have discussed this with over the years, the turn on is as much about the relationship, the feelings between us, the process, the connection, the romance, and the intimacy as it is about pure sexual desire. Intimacy is defined here as vulnerable, raw, and real communication and connection, not as sex only. My desire is directly linked to how I feel. This doesn’t mean that I don’t have sexual cravings completely separate from my emotional self, I certainly do. However, that desire will generally not override my feelings of not being cared for, listened to, or connected in such a way that I will choose to have sex when feeling disconnected, hurt or upset.

The other day, my husband was boating with some buddies, and they shared their new favorite pick up line, ‘show me your vagina’. Masen busted up, and said ‘how’s that working for you?’ One shared that they only tried it one time, in a bar when drunk, and that they have been permanently banned from that particular bar.

Of course, they were all joking, but I think that it is likely that ‘spreadsheet’ guy’s ways of ‘initiating’ sex were less than optimal. I think that sometimes men don’t realize that saying things like ‘show me your vagina’, or ‘great tits’ or other equally adolescent comments are a complete turn off. In addition, saying things like, ‘hey, you want to have sex’, when there has been no awareness of the other, or any communication or listening for an extended period, will probably meet with rejection. Being out of relationship during the day, and then starting to get ‘frisky’ at night without any connection, is not likely to be a turn on unless the woman is already feeling safe, loved, appreciated and romanced.

I would bet that this guy has no idea that his behavior on a day to day basis affects his wife’s interest in sex. My husband, who is generally a totally ‘new age’, communicating and aware kind of guy and knows better, still sometimes acts surprised when he spends the day in a pissy mood, arguing with me every chance he gets, defending his points, and basically being an all around pain, and then he ‘discovers’ that I don’t want to have sex. Now of course, after nearly 22 years of marriage, he does realize that there is a connection between ‘the words that come out of his mouth’ and my sexual desire, and he can usually smooth talk his way back into my sex drive. He manages to do this however, because he does realize that his words and actions have an effect, so he changes what he is doing and saying.

Some people might hear this as a game. It could be interpreted that way, however it is not. For me, and I think for many women, feeling connected IS the turn on, and without it, the desire fades and vanishes.

I feel bad for ‘spreadsheet guy’. I think it likely that he has no clue about any of this. As indicated in many of the responses to the article, it is just assumed that a woman should be turned on and ready to have sex, regardless of all else. He has probably tried his best, in his own way, to give her a chance to be interested, and he feels exhausted, confused, and defeated by what he experiences as the constant rejection.

In addition, it is possible that the woman in this scenario doesn’t really realize where her sex drive went either. She just knows she feels more and more distant, apathetic, alone and not turned on. She might even feel inadequate for not wanting to have sex more. She too might feel deflated and defeated from a constant sense of rejection of her needs, wants, and desires. On the other hand, if she does realize why she is not turned on, she’s likely to feel irritated, upset, and resentful towards him for not working to fulfill her needs and just expecting to have his met.

The solution for change is certainly complex and would require a whole new level of trust, honesty, and communication. Spreadsheet guy has responsibility in recognizing whether or not she is turned on enough to him in the rest of their lives to want to have sex with him, and then adjusting his behavior and timing to turn her on so both of their needs and desires can be satisfied. And for her, more direct communication, and specific requests are important in helping him understand the connection what he does and her interest in sex.

Although the answers aren’t simple, I do know one thing however. Vigilantly tracking her responses to him in a spreadsheet certainly won’t get these two anywhere and is right up there with asking ‘can I see your vagina’ in terms of its likelihood to get him laid. 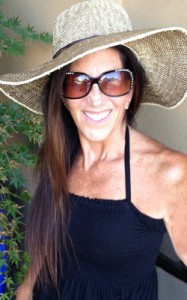